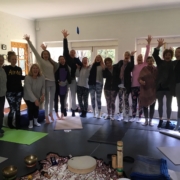 Each yoga day seems to be so unique and the Spring edition of 2019 is one of my favorites! The studio was at full capacity and although the regulars were quick to book in some new yogis managed to secure a mat as well. The focus on this day of the new moon was to better understand the chakra system and how a basic knowledge of the system can guide the yoga practitioner towards a more wholistic and healing practice.

We looked at the sushumna or central channel that runs from the perineum to the crown of the head and how each chakra sits one on top of the other along this central channel when they are perfectly aligned, creating a powerful taddasana or mountain pose or in lay man’s terms perfect postural alignment. Chakras are like wheels or disks that have within them stored information gathered at critical points of development. For example, chakra one holds all the information your system gathered from the womb to age 1 year and so if you were cared for well in the womb and mother was fairly stress free and positive your first chakra stored the information that you were safe and cared for. You received the message that you have the right to be here. This would not be true for an infant whose needs were not met and left to cry or go hungry. This child stored the message that the world is an unsafe place and the chakra would be deficient in some areas and excessive in others in order to find a way to stay in a place that was not in alignment with wellness and being nurtured. Such protective mechanisms are stored in each of the seven chakras according to the experiences received right through to adulthood. As a consequence, some chakras sit in front of the central channel or behind or to the left or right of the central channel and this affects the posture. It’s the body’s way of telling us where the deficiencies or excesses are: where energy is stuck. Yoga can undo some of this misalignment stored in the physical posture, the emotional charge we carry or the incorrect belief systems we cling onto.

These deficiencies or excesses can show up quite clearly in some areas such as the fifth chakra at the neck, the center for communication and sound. Not being allowed to express your truth as a child can lead to deficiencies in this area and not being able to speak with confidence and clearly. An excess would show up as talking too much and not being able to listen well. There are 7 chakras and each has its lesson that needs to be integrated to feel whole and human. Yoga is designed to bring the body to a strong and aligned posture where the center of gravity is with in the central channel. A consistent practice breaks up the knots within the chakras where energy is blocked. The ida and pingala or yin and yang aspect of the self assists in moving energy back to the center: stillness required here, movement required there, a push required here and a pull required there. To highlight this dance we looked at the 3 areas in the body that can be locked and released in order to stimulate the chakras: the jalandhara bundha the fifth chakra lock at the neck, the uddiyana bundha the third chakra lock at the abdomen and the mula bundha the first chakra lock at the perineum. Locking these areas stimulates the chakras below and above.

Participants were exposed to this system through a 2 hour practice that exercised all the chakras and exposed some of the key principles in order to deepen the yoga experience. This is often not available in a weekly one hour practice and spending a day is a huge privilege and opportunity to absorb the ancient wisdom that leads us back to wellness in body mind and spirit. A full 15 minute savasana gives the body the critical time it needs to absorb the 100 minute practice.

Lunch involved whole food that the body can absorb easily and readily distribute so that the cells can access energy. The energy is used to replenish what was lost through the practice and to store new energy for the afternoon session. Loads of salads, nourishing soups, baked potatoes, avocados, chickpea dips and for the meat eaters a Spanish chorizo stockpot with home made chorizo, courtesy of my brother Abel who learned the skill from our father who learned it from his father.

After lunch we focused on the heart chakra and practiced partner yoga to connect with the subtle body. Simple hand exercises to open the hand chakras led to the understanding that like a hand opening and closing our systems are designed to open and contract according to the information being received and the requirements in the moment. Rigid or fixed ideas are paralyzing and life exists outside of these fixations in what is commonly known, as the flow. To illustrate; uttanasana asks the hamstrings to open and the quads to contract and the movement of both creates the forward bend and in the same way we may need to open one chakra and close another, be loud in one moment and quiet another, be very action based in one moment and still in another, never attaching to any fixed ideas of who or what we are. This was practiced by working with another person and really being present. This presence requires us to step outside any fixed ideas of what we are to simply become aware of the requirements in that moment, do I need to contract or open in order to keep the flow alive? In the partner back bend for example one person was contracting while the other was opening the heart center and trust was required for both to be able to help the other experience both aspects of the posture. Patience was required, presence, strength, communication and an awareness that being opened or closed are not end products. Instead they are bookends that hold the movement that fluctuates between the two and true relationship is in that movement. Often, we hook into the notion that relationship is based on an idea of a person or what that person was yesterday or who that person needs to be for us today. Presence says to let go of the idea and simply watch, feel and act according to the needs of self and others.

Participants were very blessed to experience a sound bath at the end of the day delivered by Tiz Robinson who had participated throughout the day. Her ability to absorb the teachings and weave them into the delivery of the sound bath was a treat for participants. Many and varied sounds were experienced to help people release, absorb, integrate, nourish and rest. Once the sound left the quiet remained and in this quiet stillness soothing touch was delivered from a space of love while people lay in supported child pose. This is gold for a deficient or excessive chakra.

When so much of the world is in turmoil a small group of people gathered on a Sunday in the country. We remembered the ancient wisdom of the masters who have kept and continue to keep the flame of peace alight until the moment when more of us can turn towards it so the turmoil can dissipate. We all have a role to play in this.

Want to join the discussion?
Feel free to contribute!